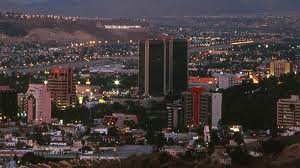 For years a prime battleground for drug traffickers, Mexico’s northern border saw a reduction in drug-related violence in 2011 even as the numbers continued to rise in the country overall, according to a report released Friday by the Trans-Border Institute at the University of San Diego.

Baja California, and particularly Tijuana, registered some of the most notable declines. By contrast, other parts of Mexico experienced significant spikes in drug-related homicides, and the violence spread to areas that previously were not affected much.

“What we think is that possibly Mexico has begun to turn a corner in terms of the levels of violence,” said David Shirk, director of the Trans-Border Institute and one of the study’s authors. “It could go way back up very quickly, as we’ve seen in previous years, but for now the general trend is a downward slope that has continued into 2012.”

The report notes that reduced violence has been especially noticeable along Mexico’s northern border: In 2010, half of the homicides linked to organized crime took place in the country’s six border states, compared with 44 percent last year.

Such killings in the northwest Mexican states of Chihuahua, Baja California and Sinaloa dropped by about a third last year, a shift that Shirk attributed to the Sinaloa cartel’s growing control over these areas. At the same time, these types of killings rose significantly in the states of Nuevo Leon, Veracruz, Jalisco and Tamaulipas, where struggles over territory between rival drug organizations have increased.

The study also showed that although drug-related violence still plagued areas that long have suffered from it, these crimes spread to new areas of the country, affecting major cities such as Monterrey and Veracruz. Illustrating the growing geographic dispersal, the study notes that in 2010, the five most violent Mexican cities accounted for 32 percent of such homicides and that a year later, the figure fell to 24 percent.

Keeping tabs on Mexico’s rates of drug-related violence — who gets killed, and where — can reveal significant patterns and pinpoint trouble spots, Shirk said.

With more than 50,000 lives lost to the drug war in Mexico during the past five years, “this is Mexico’s Vietnam in a sense,” Shirk said. “Giving witness to the violence that Mexico is experiencing, giving a name and a face to the aggregate statistics is in part something that we have to do to honor the dead. It’s also an exercise that will help guide policy.”