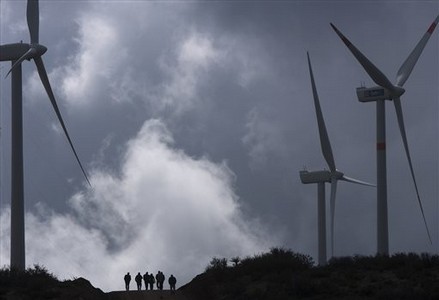 The wind farm is located in the state of Baja California and took a total of 350 million pesos. Mexico intends to rank among the 15 countries with greater production of renewable energy, mainly wind power.

The wind farm is located in an area of 42 hectares in La Rumorosa, owned by the government of Baja California. It has five wind turbines of 2 megawatts each. The towers are 78 meters high, which is located at kilometer 75 of the road Mexicali-Tijuana. The cost of government funds was projected at 26 million dollars.

The idea is to harness wind energy to supplement the currently used. In another aspect, in 2012 La Rumosa in Baja California, along with La Ventosa, Oaxaca, will become the leading producers of wind power in Mexico. The wind farm, which was conducted with federal and state resources, meet the need of street lighting in Mexicali, in addition to the savings generated that will be distributed among the poorest people of this city, so they can pay their electricity rates, said President of Mexico, Felipe Calderón.

During the inauguration of the project, the executive added that Mexico would become the most advanced country in all Latin America and one of the top 15 worldwide in renewable energy production, mainly through wind power. "With that friends, we are at the forefront and will continue to seek clean energy schemes," he said referring to the new facility.

According to the Federal Electricity Commission (CFE), the program of diversification of generation sources achieving the 25% of the total electricity production in the country with renewable energy sources by the end of the current federal administration. Rumorosa wind farm consists of five wind turbines manufactured by Gamesa in Spain and is the first phase of the development plans of harnessing the wind energy in the Baja California state.

The area has a wind potential Rumorosa estimated in more than 3 GW, and part of the energy generated could be exported across the border into the United States to help meet the demand for clean energy from California. The energy analysis indicates that by 2011, alternative energy supply can reach 75 percent of the energy needs of street lighting throughout the state of Baja California. The analysis of economic and energy policy indicates that the cost of generating wind energy on a new round wind farm is between 6 and 8.4 cents per kilowatt-hour (kWh) with optimum conditions, below the 9 cents per kWh in a natural gas plant. We have mentioned that wind farms are long term investments and the projects are not affected by volatile oil prices.

Tecate, Baja California. During the inauguration of the La Rumorosa Wind Park, President Felipe Calderón declared that Mexico will become the most advanced country in the generation of renewable energy, such as wind energy, throughout Latin America and one of the 15 most important ones worldwide. “This will place us at the forefront and we will continue to seek clean energy schemes," he said.

On tour in Baja California, in the municipality of Tecate, the President said that this park will cover Mexicali's public lighting needs and the savings it creates will be distributed among the city's poorest people to enable them to pay for their electricity.

“This wind park, which cost $350 million pesos and which we produced between the state government and federal government will enable us to pay for street lighting in Mexicali, in other words, produce electricity for public lighting,” he explained.

Accompanied by state governor, Guadalupe Osuna and Energy Secretary Georgina Kessel, the President declared that at the start of his government, there was virtually no wind energy, adding that there are 10 megawatts in the La Rumorosa units and that 2,500 are under construction.